What Is A Mini-Cut? 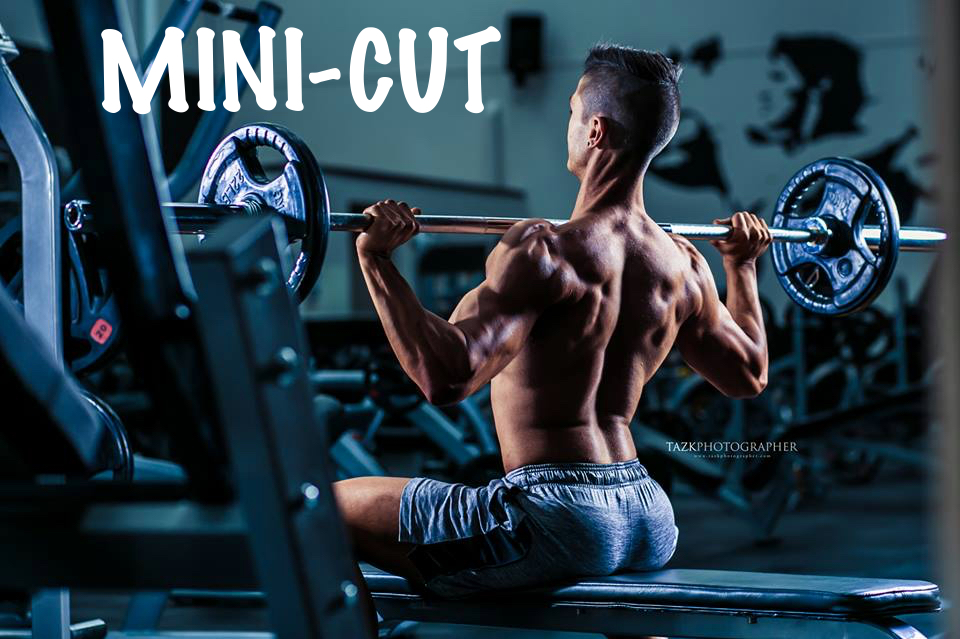 So you’ve been in a calorie surplus for some time now,

but you’ve also added a little too much body fat…

Maybe it’s time for a mini-cut!

What is a mini-cut?

A mini-cut is a brief period of time (see below for exact time frame) where you drastically reduce your calorie intake to put yourself into a significant calorie deficit after being in a calorie surplus for an extended period of time.

The aim of a mini-cut is to lose as much body fat as possible in a short period of time before quickly transitioning back into a calorie surplus and continuing on with your gaining phase.

While you are cutting weight quickly, the goal of a mini-cut should be to get in and out as quickly as possible without having to sacrifice any muscle mass.

Who Should Use One?

A mini-cut is perfect for anyone who has spent a significant period of time in a calorie surplus/gaining phase and has let their body fat creep a little bit too high.

Therefore by utilising a mini-cut you allow yourself to continue on with your gaining phase at a healthier, more optimal body fat percentage (%) once the reduction in calories is over.

Who Shouldn’t Use One?

If you’re currently in a gaining phase and only in a slight calorie surplus maintaining a relatively low body fat percentage (%), a mini-cut is probably not for you.

The reason for this is by going into an aggressive calorie deficit you will not make any progress towards your long term goal of gaining muscle mass.

Your strength levels will most likely decrease or plateau, body weight will drop and in the big picture you’re simply wasting time you could be putting towards gaining and making progress with your physique, training and metabolism.

How To Set Up A Mini-Cut

*For the sake of keeping things simple we are going to base these numbers of your total body weight, not lean mass. Simply divide numbers by 2.2 if you’re using pounds (lbs).

How Long Should It Last For?

By remaining in such an aggressive calorie deficit for any longer than 6 weeks you are risking loss of muscle mass.

Ideally you want to get in and out of this dieting phase as quickly as possible, otherwise this becomes a regular fat loss phase (which should be structured completely different, with calories starting a lot higher and weight loss happening significantly slower).

“How quickly should I get back to a calorie surplus?”

If you have been in a deficit for 3-4 weeks then simply go directly back to where you were previously.

If you have been in a deficit for 4-6 weeks it may be a good idea to gradually increase calories over a 2 week time span to get back to where you were previously.

Throughout this short period of being in a calorie deficit your strength training should remain the same, focusing on heavy compound movements and progressively overloading over time.

Ideally you should be aiming to at least maintain strength if not continue increasing throughout your mini-cut.

Seeing as though the whole point of this cut is to drop fat as quickly as possible before continuing on with your gaining phase, it can be beneficial to add in anywhere from 2-5 sessions per week.

In saying that, it’s important to keep in mind you will already be in a severe calorie deficit so added cardio may not be necessary.

It’s best to monitor your weight changes over the first week of the mini-cut and then make any changes that need to be made after that.

See this article for the pros and cons of both HIIT and steady state cardio: HIIT vs Steady State Cardio For Fat Loss